British actress Phoebe Waller-Bridge accepts the Outstanding Lead Actress in a Comedy Series award for “Fleabag” onstage during the 71st Emmy Awards at the Microsoft Theatre in Los Angeles on September 22, 2019.

Think about the last TV show you recommended to a friend, or the last one that was recommended to you. Odds are, it was from a premium service like HBO, Netflix or Amazon.

While there are some must-see shows on cable — “The Good Place,” “This is Us,” “Atlanta” and “Schitt’s Creek” — there is a disproportionate number more on subscription-based services.

Sunday’s Emmy Awards is just one indicator of this trend.

First, there are the nominations. Heading into the ceremony, HBO had 137 and Netflix had 118. For comparison, NBC had 58 and CBS has 43. 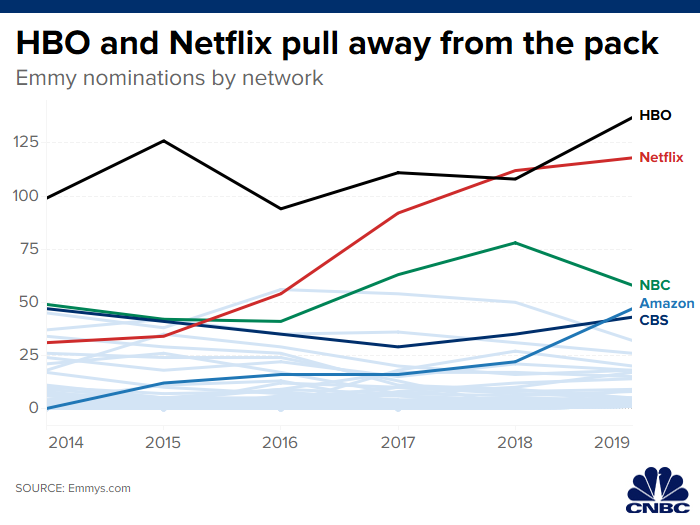 While HBO has long held a high number of nominations compared to its cable counterparts, Netflix has risen in the ranks over the last five years. Netflix was first eligible for Emmy consideration in 2013.

Between the Creative Arts Emmy ceremony, which took place earlier this month, and the telecast on Sunday, the top award winners were all premium TV companies. HBO hauled in 34 awards, Netflix earned 27 and Amazon took home 15. 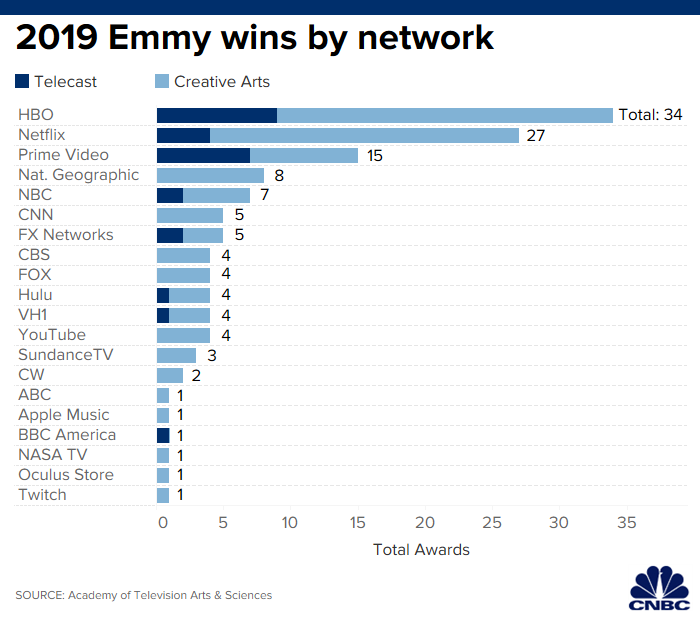 National Geographic had the fourth-most Emmy wins with eight and NBC came in fifth with seven.

Notably, the number of Emmy wins for cable TV shows have shrunk in the last few years. While NBC and CBS had breakout hits like “This is Us” and “Big Bang Theory,” those programs aren’t getting the same buzz that they used to.

Premium services dominated the telecast, winning 21 out of the 27 awards given out on Sunday night.

“It’s not a recent trend,” Michael Pachter, an analyst at Wedbush, said. “It’s been consistent and I think the reason is the premium guys pay up for much more specialized content and they are able to take chances.”

While many cable companies must adhere to strict broadcast standards that censor obscene, indecent and profane content, the premium stations don’t have quite as many rules.

HBO, Netflix and Amazon thrive when they please their audiences. If subscribers like their programs, they will continue to pay the monthly fee to watch them. Cable TV is beholden to both its audience and its advertisers. The vast majority of advertisers don’t want their products or services presented alongside inappropriate language or explicit sex scenes.

And the ability to swear or show nudity isn’t the only reason creators are flocking to these services. Netflix, HBO and Amazon have been known for giving writers, producers and directors a lot of latitude when it comes to the type of shows they create and how they tell those stories.

Of course, there are plenty of shows on cable that break the mold and are successful. However, for some creators, the confines of the traditional cable TV strategy isn’t conducive to the particular story they want to tell. Also the premium services are willing to shell out more money for content.

D.B. Weiss (C) and cast and crew of “Game of Thrones” accept the Outstanding Drama Series award onstage during the 71st Emmy Awards at the Microsoft Theatre in Los Angeles on September 22, 2019.

Even Amazon has been swooping in to grab creators. It is reportedly paying “Westworld” showrunners Lisa Joy and Johnathan Nolan $150 million over the next five years to create content for the platform.

“I think the next 10 iconic shows will be premium service originals,” Pachter said.

There’s been a lot of discussion about whether the entrance of Disney, Comcast and Apple into the streaming market will disrupt and ultimately “kill” Netflix. But Pachter said it’s not Disney+ versus Netflix.

“The better question is which would you prefer: streaming or cable?” he said.

To be sure, cable isn’t going to disappear. 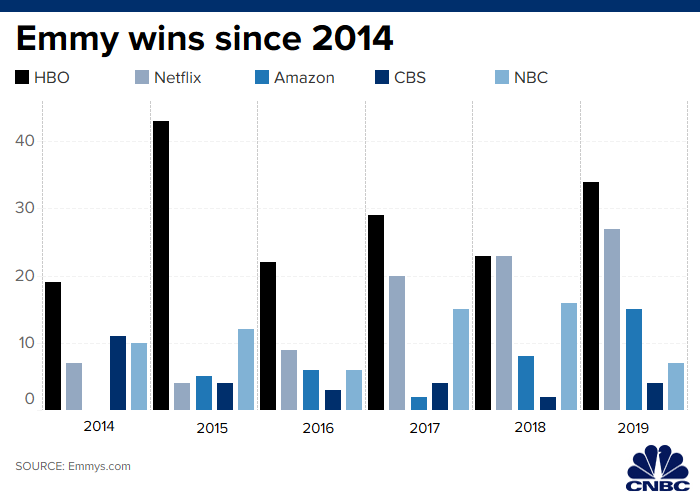 Rayburn noted that sports are a major reason people keep their cable subscriptions. Even as Hulu and specialized apps like NFL Sunday Ticket make it easier to view baseball, football and soccer games, these programs are not likely to leave cable stations.

While a service like Amazon would have enough cash on hand to buy up the rights to broadcast the NFL’s season in 2022, it has little incentive to do so, Rayburn said. Cable companies thrive on sports coverage because of the advertising dollars. Without ads, a company like Amazon would have no way of recouping the money it spent on the sports rights without boosting its subscription cost.

That being said, the growing competition in the streaming space will only continue to improve the content that comes out of those streaming services. In order to entice new subscribers and to retain them, these premium services have to keep churning out hits.

Unlike cable, audiences can’t just click to a different station. If there isn’t anything of worth on the platform, they’ll unsubscribe and spend their money elsewhere.

“[Competition] is going to vastly improve the product on these premium services,” Pachter said. “And I think that those production companies are going to be much more emboldened to take bigger and bigger risks.”

Disclosure: Comcast is the parent company of NBCUniversal and CNBC.